HomeEntertainmentsYou Are a Prostitution! Mercy Aigbe’s Ex-Husband, Lanre Gentry Labels Her An “Ashawo” And A “Dog”
Entertainments

You Are a Prostitution! Mercy Aigbe’s Ex-Husband, Lanre Gentry Labels Her An “Ashawo” And A “Dog”

Lanre Gentry the ex-husband of Nollywood actress, Mercy Aigbe, has replied to those asking him to go for a DNA test on his kids asking how many DNAs can you do for dogs.

The businessman, who is already married to another woman following the end of his marriage to Mercy, took to Instagram to call out his ex.

Mercy Aigbe was accused by the wife of her husband of sleeping with him when her son was 5 months old and now has moved on to be his wife which has got her dragged on the gram which is why some are asking her husband to go for a DNA.

He was reacting to a post made by Funsho Asiwaju Adeoti, the first wife of Mercy’s new husband, Kazim Adeoti.

Funsho claimed actress Mercy Aigbe was her friend and she brought her close to her family but Mercy rewarded her by sleeping with her husband and becoming his wife.

Funsho also alleged that Mercy began sleeping with her husband Kazim when Mercy’s son, who is now almost 12, was just 5 months old.

Netizen has asked her ex-husband Lanre to go for a DNA test to confirm whether the child is his or not with some even offering to contribute and pay for the money needed.

But Lanre said that there is no bastard in the Nigerian constitution.

When told that he “must” carry out a DNA test to confirm the paternity of the son he has with Mercy, Lanre said: “How many DNA can you do for dogs?”. 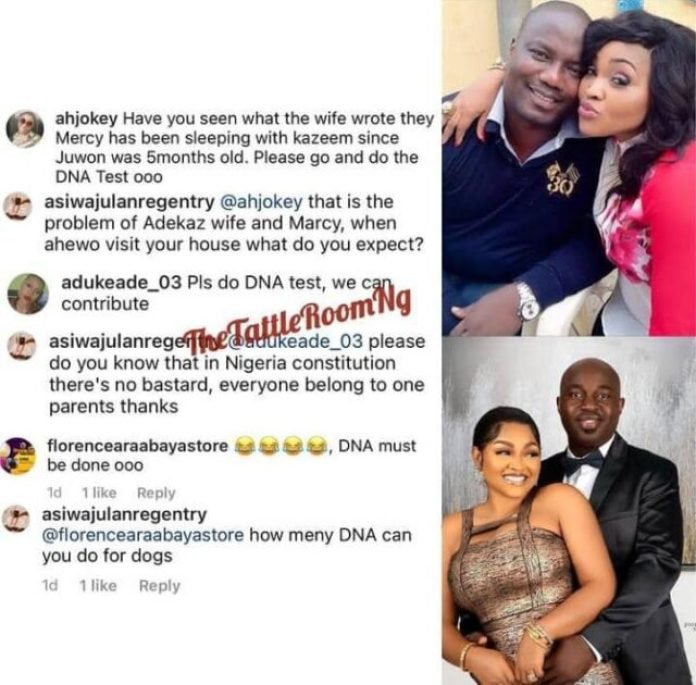