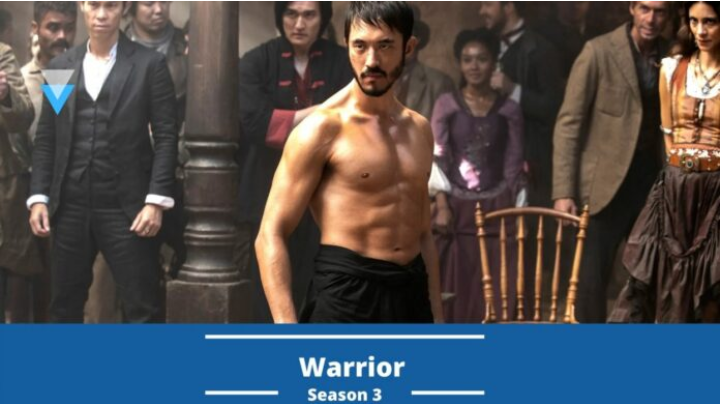 Two seasons of Warrior were produced by Cinemax and shown on the network throughout the first two seasons. However, Cinemax chose to discontinue creating new television shows following Warrior’s second season. Thus, it was terminated as a result of a network rethink. When HBO Max added the series to its streaming collection in January 2021, it gained a new audience.

Despite the fact that Warrior made its debut in 2019, its roots go back decades. Bruce Lee, the martial arts movie messiah, came up with the original notion for what would become Warrior. A TV series based on Lee’s ideas was never developed after his death in 1973. When it comes to the two seasons of Warrior, we can thank Bruce Lee’s daughter Shannon Lee for her tireless work.

When a Chinese martial artist moves to San Francisco in the late 1800s, his journey starts, according to Bruce Lee’s original idea for the film Warrior. His involvement in the continuing fight between San Francisco’s tongs (community centres for Chinese immigrants, often linked to organised crime) quickly finds him entangled in the continuous war between these groups.

As a result of HBO’s decision to put Warrior on its flagship streaming channel, HBO Max has decided to develop a third season of the show. Everything we know about Warrior Season 3 is shown below.

When will Warrior season 3 be released?

Warrior filmmaker and Fast & Furious director Justin Lin was among the first to hope for a third season. As Lin puts it, “there were a lot more stories to tell” for the Warrior squad. According to actor Chen Tang, who starred as Yao in Mulan: The Live Action Adventure and is now in his second season on Warrior as Hong, producers had originally intended for four or five seasons of the show. He, too, was one of the vocal supporters of a second season following the show’s demise. A shift that can’t be avoided. In the meantime, a petition for a third season had already exceeded its goal of 65,000 signatures before Season 3 was confirmed.

After months of speculation, HBO Max tweeted a video in April 2021 in which the Warrior cast and crew stated that the show will return for a second season in the future. Due to the fact that HBO has yet to confirm a debut date for Season 3, and that the ongoing epidemic may complicate matters, the third season will not broadcast until late 2022 or even in 2023 at the earliest.

Who will star in Warrior season 3?

Because the cast of Warrior has not been formally announced, it is still uncertain who will return for the series’ second instalment. A certain amount of passion for the series appears to be shared by a number of producers and cast members alike, as seen by their public support for a third season prior to the series’ renewal being confirmed. As a result, it’s probable that the team behind Season 3 will be similar to that behind Season 2.

Assuming that all of the show’s key performers will be returning, Andrew Koji will reprise his role as Ah Sahm, the martial artist who serves as the show’s core character. Dianna Doan had previously appeared in the show’s first two seasons, in which she played Mai Ling, Sahm’s sister and the head of the Long Zii tong. In addition to Sahm, brothel madam Ah Toy (Olivia Cheng) and recently appointed Hop Wei tong chief Young Jun were also fighting with him (Jason Tobin).

Aside from that, Shannon Lee said in an interview with Pop Culture that she had plans to appear in a cameo role in what was then a potential third season. Shannon Lee is a cross-disciplinary student of Taekwondo, Wushu, and kickboxing, following in the footsteps of her father Bruce Lee’s Jeet Kune Do martial arts ideology. In order to make advantage of her real-life fighting skills, it is probable that she will appear in a cameo role.

What will be the plot of Warrior season 3?

Second season of Warrior ended with a cliffhanger that might be broken into two halves. So it’s quite probable that those two particular narrative strands will be handled when the series returns. Zing (Dustin Nguyen), who has been imprisoned, looks to have escaped his cell in the season’s final moments, according to one theory. His return as the commander of the Fung Hai tong is expected to cause significant disruption in the current tong battles. The revelation that Ah Sahm is Mai Ling’s brother, on the other hand, was made public near the conclusion of season two. This means that in Season 3, the impact that knowledge will unavoidably have on inter-tong politics should come to a head.

On another front, Mai Ling is blackmailing Samuel Blake (Christian McKay), the mayor of San Francisco, on his alleged background as a Confederate soldier, which he discovers through his daughter. Their continued cooperation, on the other hand, should only serve to stoke the flames even more. Based on the innumerable previous series developments, it is very certain that each of these narrative twists will culminate in a great deal of violence and subsequent carnage.