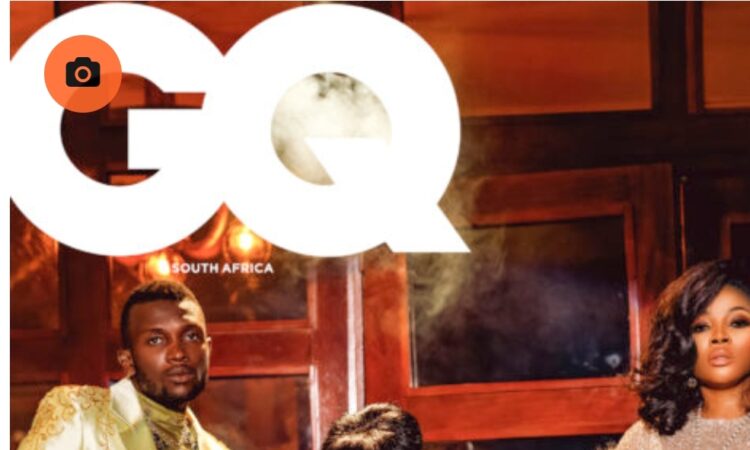 The cast of the upcoming feature film titled “Singing Sin“, Omotola Jalade-Ekeinde, Toke Makinwa, director Ifan Michael, and script-writer Cheta Chukwu, are fierce on the cover of GQ South Africa’s latest issue, where they share the need-to-know details about the film and lots more.

Ifan Michael and his production company, Think Ifan Productions, are behind “Singing Sin,” a period drama that depicts the lives of African women in 1980s Nigeria, including their trip to the stadium, self-discovery, and personal issues.

Omotola discusses her role in the upcoming feature film, as well as the importance of continuing to advocate for women and their voices, in this interview with GQ. Toke talks about the process of preparing for her role, Ifan talks about his vision as a director, and Cheta talks about writing “Singing Sin” and his love of telling stories with strong female protagonists.

Read excerpts from the interview below:

Omotola on what drew her to this film:

The story. The possibility. My attraction to different stories, and more.

Omotola on the ways this film will tell the stories of older women:

Not sure why the term “surprisingly”, because Nollywood has been known first for its depth of stories and widely enjoyed for the drama and depth of culture and nuances mostly by women of all ages. However, I am always happy to see projects that are women inclusive, both in front and behind the camera and that keeps pushing the envelope with the stories they tell. These are the stories that I have always championed and will continue to champion. And with Singing Sin, we have an opportunity to dive into that world, a world controlled by women, each with their different journeys.

Toke on her experiences in film and exploring this new aspect of her creativity:

I think that my entire career has evolved over the years. Movies are not a new experience for me. When I was young, I was in the drama society in school, acting in the church and trying to explore my creative juice. I admit that, over the years, I haven’t focused on movies. My radio career, TV career, influencing and all other aspects of the Toke Makinwa brand have been at the forefront. But I find movies exciting and, in the last 3 – 4 years, I’ve made sure to do at least 2 projects. It is relatively new that I am acting professionally, but it’s always been in the blood. I pick projects that intrigue me and push my creativity to the next limit. I am always excited by the outcome. It is an interesting aspect of my brand. I love film and I love the act of telling stories and enjoy playing characters that are completely different from what people visualise Toke Makinwa as.

Toke on why she loves the script:

Sisterhood! I love the way is portrayed; the strength, the beauty and just the support of going through everything together. I think people will be really excited seeing this project.

Ifan on how the idea of “Singing Sin” came about:

I’ve always been intrigued by the lives of women in the 70’s, what it felt like at that time. I wanted to approach the subject matter musically, but also to explore some really important themes like self-image, ambition and the complexities of relationships. It’s something very monumental for me. I’m super excited that it’s happening now.

Ifan on the directorial vision for the film:

My vision is for people to be able to see themselves in these characters, to understand them and their journeys. I want people to be able to have conversations about the film at the end of the day. That’s always a good place to start. The themes and issues we are exploring are real, and it’s quite shocking that even though the film is set in a different era, it almost seems like not much has changed. You know, it’s still relevant. You can watch it and not feel disconnected.

Cheta on the character that was the most complex to develop and write:

Definitely Omotola Jalade Ekeinde’s character Elektra. There’s so much layers to her. It was important to present her in a way that feels relatable, whether you agreed with her decisions or not. And with a woman like that, you often see how pain changes us and how it in turn changes the people around us.