HomeSociety NewsThey Beat Me Up And Blood Was Gushing Out Of My Mouth, Took Away My Phone- Footballer Beaten by Soldiers Laments
Society News

They Beat Me Up And Blood Was Gushing Out Of My Mouth, Took Away My Phone- Footballer Beaten by Soldiers Laments 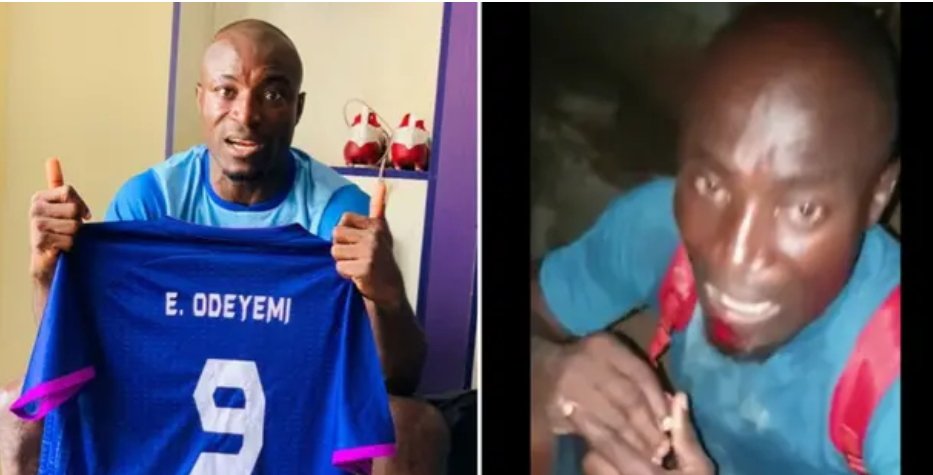 Shooting Stars striker, Ebenezer Odeyemi, has shared on social media that he and three of his teammates were on Tuesday night, assaulted by men of the Nigerian Army in Ibadan, Nigeria.

The player who shared a video of himself on Twitter, with the caption “Just look at what Soldiers did to me after I told them I’m a professional footballer. This has to stop”, was seen, bleeding from his mouth.

According to a report by OyoSportsNews, Odeyemi and his teammates Adekunle Adeniyi, Sochima Elum and Chimamkpa Onwubuchie on Tuesday night, made a stopover (for dinner) while returning from a Shooting Stars training session at the Lekan Salami Stadium.

While having dinner at a nearby cafeteria at Idisin: near the club camp at Jericho, in Ibadan, the Oyo State capital, they ran into uniformed men of the Nigerian army.

The encounter with the military officials wasn’t however, a routine security check, but an assault without valid explanations.

While Adeniyi, Elum, Onwubuchie managed to escape the soldiers, Odeyemi couldn’t and, was beaten to stupor.

“We just left the training session around 6 pm and we decided to take dinner at a nearby food canteen. As law-abiding citizens, we actually saw them about a mile away from our seats but we believed they were on their normal duties. So, we decided to continue with our discussions while eating.”

“They came to us with an attempt to beat, my colleagues had to escape and while I was about to manage my way out of them, I fell down and they came to me for serious beaten. I told them I’m a professional footballer with a state club (Shooting Stars) but they never listened, I was beaten and they left with my phone.”

“We later decided to inform a retired military man at the estate within the club camp for assistance. We both located their base and they gave no meaningful reasons for their actions, they apologized and returned my phone but my brother, I was beaten.

The wife of the retired soldier gave me first aid treatment after we had returned to the estate but it was a sad incident for me.”

Asked what could have led to the unfortunate incident and security surveillance carried out by the soldiers, Odeyemi explained;

“I remembered the retired military man asked them reasons for their patrol, particularly at Jericho – they told us there were reports that some guys fought each other a few weeks ago. Surprisingly, we were on away fixture and we knew nothing of such because it happened about four miles away from the canteen.”