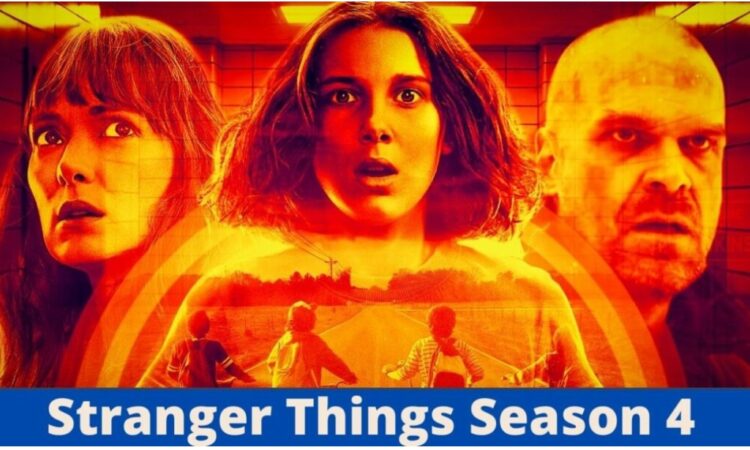 Stranger Things is without a doubt one of Netflix’s most popular and well-liked shows. In 2016, Netflix released it for the first time. Stranger Things Season 4 is currently being awaited by fans after three seasons have previously aired. It’s a science fiction series with a fantastic story.

Stranger Things 4, the fourth season of the American science fiction horror drama television series Stranger Things, is set to premiere on Netflix in mid-2022. The show’s creators, the Duffer Brothers, along with Shawn Levy, Dan Cohen, and Iain Paterson, have continued to produce the fourth season, which will contain nine episodes.

Stranger Things 3 has left a lot of unresolved questions. Fortunately for supporters, a fourth season is already in the works. A teaser for it has already been posted by Netflix. For the time being, the specifics are few, but we’ve compiled all we know about Stranger Things 4 thus far.

Stranger Things 4 is officially arriving on Netflix, and (surprise!) there are two release dates. This Monday, Netflix revealed that a massive fourth season will be published in two parts, with the first set of episodes, dubbed Volume 1, arriving on May 27. Volume 2 will be released on July 1, so fans will not have to wait another long time.

We’re going to break down the release date, cast, number of episodes, and new cast members for Stranger Things Season 4.

Stranger Things 4 is set to premiere on May 27, 2022. But, as much as we’d like to, you won’t be able to see it all in one sitting. That will just be “volume one” in the series. After a short interval, the following batch will be issued. Stranger Things 4, Vol. 2 will release on July 1, 2022, five weeks later. This suggests that the second set of episodes will premiere around the same time that the third season did in 2019. Stranger Things will always have a summertime, Fourth of July feel about it.

The release dates for Stranger Things Season 4 have been established.

Netflix has finally given us what we desire, and it is not what we expected. Stranger Things season 4 will be released in two volumes, the first on May 27, 2022, and the second on July 1, 2022, according to the firm.

Previously, Netflix had just announced that Stranger Things season 4 will be released in 2022, with a tweet confirming a Summer 2022 release date. This sparked conflicting conjecture, with some on the Stranger Things subreddit claiming May 27 as the release date and others claiming July 15.

The following are all of the details concerning the delayed-release:

According to David Harbour on Jimmy Kimmel Live, the programme “should be done” shooting in August. With the amount of post-production work necessary for a visual effects-laden programme like Stranger Things (the gap from wrap to screen on season 3 was eight months), we believe it won’t be released this year.

There’s also Netflix’s most recent earnings report. “We estimate paid membership growth to re-accelerate in the second half of 2021 as we ramp into a very strong back half slate with the return of significant titles like Sex Education, The Witcher, La Casa de Papel (aka Money Heist), and You,” Netflix wrote in a letter to investors. We’re guessing Stranger Things season 4 is a significant enough property to have made the list if Netflix was certain it was arriving that soon.

Finn Wolfhard originally hinted at a 2022 release date, telling Fanmio that “Season 4… it should be released sometime next year, hopefully.”

Maya Hawke (Robin) told Collider that she isn’t “allowed to [tell] when [they] finish filming,” implying that Netflix wants complete control over the project. Having said that, she added, “since we had so much time, the degree of work, attention, and detail that [creators] the Duffer Brothers have had the opportunity to put into the screenplays… and the performers [who] have had the time to think about their characters — it is going to be fantastic.”

Many thought that “The American” who the Russians spoke about being held in one of their base’s chambers (one of which also had a Demogorgon) was Dr. Martin Brenner. However, the reappearance of Hopper leads us to believe differently.

The programme will very certainly need to utilise a narrative element to entice the Byers family back to Hawkins from their new house.

While the upcoming season will almost certainly spend some time there or elsewhere, The Duffers told EW that season 4 would “expand out a little bit…not necessarily in terms of size, amazing effects, but open up in terms of enabling plotlines into regions outside of Hawkins.”

That makes us dubious the programme will finish without a return to the beginning.

In terms of other plotlines, Sadie Sink told Teen Vogue that her character Max will likely spend some time hiding the trauma of losing her brother Billy: “I think it makes sense for her because, as messed up as their relationship was, [Billy’s death] still has a significant impact on the dynamic within her family. But, in classic Max manner, she won’t let others know how she truly feels at times. You watch her pretending that everything is good while, in fact, everything has changed for her. She’s in a whole different emotional state.”

One major unanswered issue is how Eleven lost her powers and will likely spend some time attempting to retrieve them. Will Brenner have a role in this as well? According to sources, a bizarre fan theory suggests that Eleven is actually Hopper’s daughter. This is sheer supposition, and it appears like they are stretching things at times, so don’t bet on it just yet.

There’s even talk of a full season taking place in The Upside Down, or at least focused on Hopper’s escape from the terrifying planet.

Name of the first episode of Stranger Things Season 4:

We haven’t seen all of the episodes from the fourth season of Stranger Things. For the time being, we know the title of Season 4 Episode 1. “Chapter One: The Hellfire Club” is the title. This is Howkins High School’s official Dungeons & Dragons club, therefore we can expect a strong start to the season.

Despite the allegedly catastrophic finale to season three, we now know that David Harbour will reprise his role as Hopper. In an interview with Total Film, Harbour said that his character “We’ll see a very different guy going forward,” he says, adding that he “had to evolve” and “resurrect in some way.” He’s the same guy, but this time he’s acting in a different way. Being able to play is a fantastic experience.”

While it’s currently unknown how his character managed to survive, Harbour has stated that season four would reveal more of his past, in a nod to season two, when Eleven discovered boxes labelled “dad,” “Vietnam,” and “New York” in Hopper’s attic.

“In season four, we will give you a big, major reveal about Hopper’s past, which we haven’t really informed you about… we’re going to express it in a big way,” the actor revealed at Liverpool Comic-Con.

“It has to do with these backstories of New York, Vietnam, and dad, and it’s my favourite thing about him that you guys don’t know about him yet.”

Harbour revealed what viewers may expect in the new season in an interview with Entertainment Weekly in October. “I believe I have the best plot… As we flesh out this concept, we’re trying to pull it back and make sure we don’t have an endpoint like some of us imagined with the show Lost… ‘What happened to the polar bear?!’ We’re attempting to draw people in so that the [parts of the tale] can come together and become a whole piece. For that, Season 4 lays a lot of pipes.”

Fans of the cult 2004-2010 series Lost will recognise Harbour’s polar bear remark as a reference to the vexing unsolved mysteries concerning the furry monsters who walked around the tropical island.

On June 9, it was also reported — via a Twitter thread on the official Stranger Things account – that season four will welcome some new faces, including stars from The CW’s Black Lightning and Netflix’s Anne with an E.

Myles Truitt will play Hawkins’ basketball player Patrick, whose life will “spiral out of control” after some “shattering incidents,” while Amybeth McNulty will play Vickie, who is described as “a cool, fast-talking band nerd who catches the eye of one of our cherished characters.”

Stranger Things Season 4 will not be the last season

Despite the fact that Netflix has yet to confirm if Stranger Things will be renewed for a fifth season, showrunners and executive producers Matt and Ross Duffer have spoken out on the show’s future. In an August interview with The Hollywood Reporter, the duo was asked if Season 4 will be the final season of Stranger Things. “Season four won’t be the end,” Ross Duffer responded. We know what will happen at the end, and we know when it will happen. [The epidemic] has given us the opportunity to plan ahead and determine what is best for the programme. We were able to get a better understanding of how long we needed to tell that storey once we started filling it out.” For fans, this is fantastic news. So here’s to Season 5!

In 2017, Levy previously told Entertainment Weekly “The truth is that we’re absolutely going four seasons, with a fifth season very much a possibility. Beyond that, I believe it becomes quite implausible.”

The producers began securing the filming of the fourth season by releasing a trailer on February 4, 2020. It’s more of a teaser than a trailer, with only David Harbour’s Hopper in it. The next teaser, which can be viewed below, was released on May 6, 2021.

So, these are the latest updates from our references.