Landlords and residents of the Royal Garden Community Development Association have accused the Believers Love World, aka Christ Embassy, of encroaching on their land in Aseese, in the Obafemi Owode Local Government Area of Ogun State. 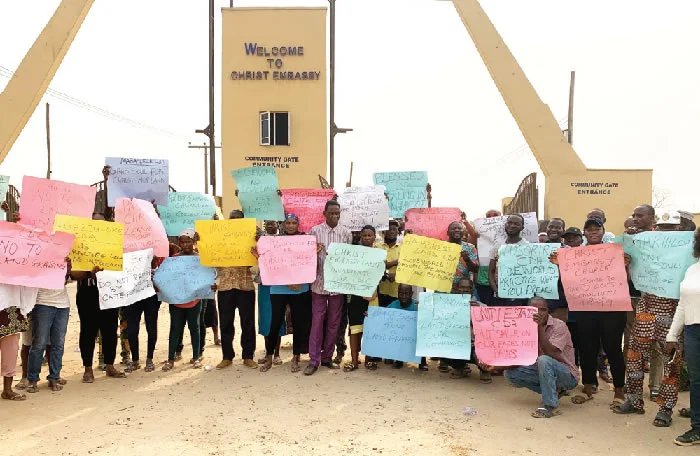 The residents said the church, while claiming ownership of the estate’s land, brought some men to mark buildings on the estate for demolition.

The landlords and residents, who staged a protest on Thursday, said Christ Embassy had no right over their landed property.

Starting around 6am, the protesters were seen carrying placards with different inscriptions including, ‘Pastor Chris, leave our community,’ ‘Christ Embassy can’t invalidate our CofO,’ ‘Do not preach by using caterpillars,’ among others.

During the protest, the Chairman of the CDA, Adekola Abayomi, said the struggle over ownership claim of the landed property had been a lingering issue in the community.

He added that efforts to get the government to administer justice in the matter had proved abortive.

Abayomi said, “We have been in a struggle for the past three years. When they came in 2019, we took them to court, but they didn’t show up. In October 2021, when most of our men were not around, they came with land grabbers to mark our houses.

“So, our lawyer wrote to the Ministry of Urban and Regional Planning in Ogun State, on the claim that representatives of Christ Embassy were saying our land falls under the church’s land, but the ministry failed to respond.

“Sometime in January, the church’s representatives came again with land grabbers to mark houses on the estate. So, we decided to protest because the government refused to respond to our letters and we want its intervention for the matter to be settled.”

PUNCH Metro gathered that during the protest, the Divisional Police Officer, Ibafo, visited the scene of the incident and later invited representatives of the CDA and the church’s Chief Security Officer, Ighodalo Ozazuwa, over the matter.

The immediate past Chairman of the CDA, Akin Olaoye, urged the state Governor, Dapo Abiodun, to a meeting where documents would be presented by members of the estate and representatives of the church.

Olaoye added, “They bought land from the Oloke family and we bought ours from the Aseese family. Christ Embassy came to our community with promises and we were happy to receive them, but they didn’t fulfil their promises.

Ogun landlords lament over estate invasion by suspected land grabbers
“When the church’s representatives came again with some government officials to mark buildings and cause pandemonium in the community, most of us had gone to work, but rushed back home.

“Since then, we concluded that we won’t go anywhere because we are afraid that they can come anytime to demolish our property. Some of our landlords have CofOs. The left side is for us and the right side belongs to the church.”

A spokesperson for the church, Chris Ebare, said he held a meeting with members of the community a few days earlier.

He added, “During the meeting, they gave me an appeal letter to give to the pastor. As of 2003 when we went there to buy land, from the major road to where our church is located, only one house owned by one Mr Rasaq was there.

“We bought land from Aseese, Mamba, Oloke, and other families. Late Alhaji Tajudeen Ogooluwa sold 522 acres of land to us. We also got CofO for the entire land. When we wanted to do our road, the government officials came to mark out the boundary of our land and that was when they marked all the property that fell on the road.

“I am the lawyer for the ministry. So, they called me and started appealing for their houses not to be destroyed. About 10 houses encroached on our land and I told them that I would take their pleas to the church authorities.”

The state Police Public Relations Officer, Abimbola Oyeyemi, said, “Anybody who has issues relating to land ownership should go to court as it is only the court that can give ownership of land to a particular person.

“So, the invitation by the police was just to caution them to allow peace to reign and not to allow their protest degenerate into a breakdown of law and order.”