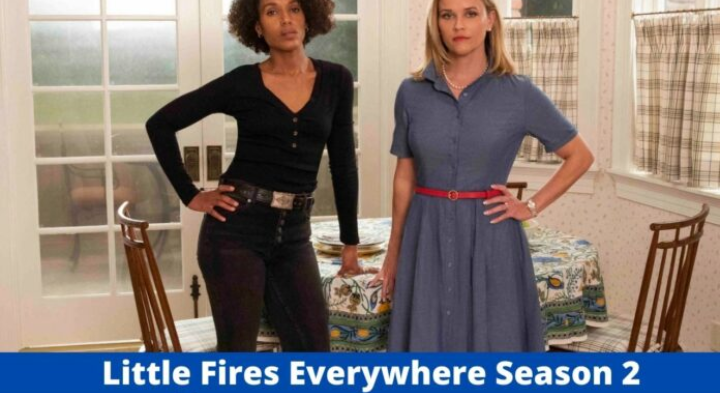 Little Fires Everywhere is a streaming American drama television series based on Celeste Ng’s 2017 novel of the same name. It has eight episodes and was released on Hulu on March 18, 2020.  Along with Liz Tigelaar, Lauren Neustadter, and Pilar Savone, the series stars Reese Witherspoon and Kerry Washington, who are also executive producers. It is set in the late 1990s in the Cleveland suburb of Shaker Heights, Ohio, and stars Witherspoon and Washington as mothers from different socioeconomic backgrounds.

Bookworms all over the world were ecstatic to learn that Celeste Ng’s novel “Little Fires Everywhere” would be adapted for the big screen — and rightfully so. The story, set in the 1990s, feels almost more relevant today than it did then.

“Little Fires Everywhere” is set in Shaker Heights, Ohio, and follows the lives of two women whose contrasting backgrounds drive them to conflict. Elena Richardson (Reese Witherspoon) is a well-mannered White woman who aspires to normalcy and perfection. Mia Warren (Kerry Washington) is a nomadic Black artist who has escaped her past and now lives in the present. Pearl (Lexi Underwood), Mia’s daughter, seeks the Richardsons’ stability, while Elena’s daughter, Izzy (Megan Stott), idolizes Mia’s way of life.

Both the novel and the series, which dealt with subjects such as race, adopted vs. biological family, and identity, were well appreciated, with the latter receiving a 78 percent critics rating on Rotten Tomatoes. Even though a second season has not been guaranteed and all of the source material has been exhausted, the tale can still continue in new directions when the show ends.

When will Season 2 of Little Fires Everywhere be released?

There is currently no word on a Season 2, let alone a release date. The story’s scriptwriter, Liz Tigelaar, has expressed interest in extending it. “I would love to do a season two,” she told Vulture, “because this was the best creative experience of my life.” Though she enjoyed working on the program, Tigelaar admitted that bringing Mia and Elena together would be tough given their rocky relationship and that if they did something else, it would be more like a spin-off.

Celeste Ng, author of “Little Fires Everywhere,” expressed her thoughts on the prospect of a second season. “Right, you never say never. These figures might return to me with a suggestion for further stories to tell.” Ng, on the other hand, thought the finale left enough room for fans to speculate about where these characters might go next.

If the characters do return to Ng and Tigelaar, it’s safe to assume that any form of Season 2 will be a long time coming.

Who will appear in Season 2 of Little Fires Everywhere?

Reese Witherspoon (‘Legally Blonde’) and Kerry Washington (‘Scandal’) are most likely to return as Elena Richardson and Mia Warren, respectively if the show returns for season 2. Lexie Underwood, who plays Mia’s daughter Pearl, Jade Pettyjohn, and Megan Stott, who plays Elena’s daughters Lexie and Izzy, Gavin Lewis, who plays Moody Richardson, and Huang Lu, who plays Bebe Chow, are among the other cast members who could return. Also expected to return as the McCulloughs are Rosemarie DeWitt and Geoff Stults, among others. In addition to the regular cast, exciting new characters may be added to move the plot forward.