HomePoliticsIgbos are Nigerians, our Brothers- Northern Youth call on Emefile to contest for President
Politics

The Youth after a Press Conference in Yola, Adamawa State

A Northern group have described Igbos tribe as one of the strongest socio cultural group that have been marginalize since the return of democracy in 1999.

The group under the umbrella of Unified Northern Nigeria Youths Forum said the policy of unity in Diversity has been altered, this is making the group to sympathise with the Igbos. 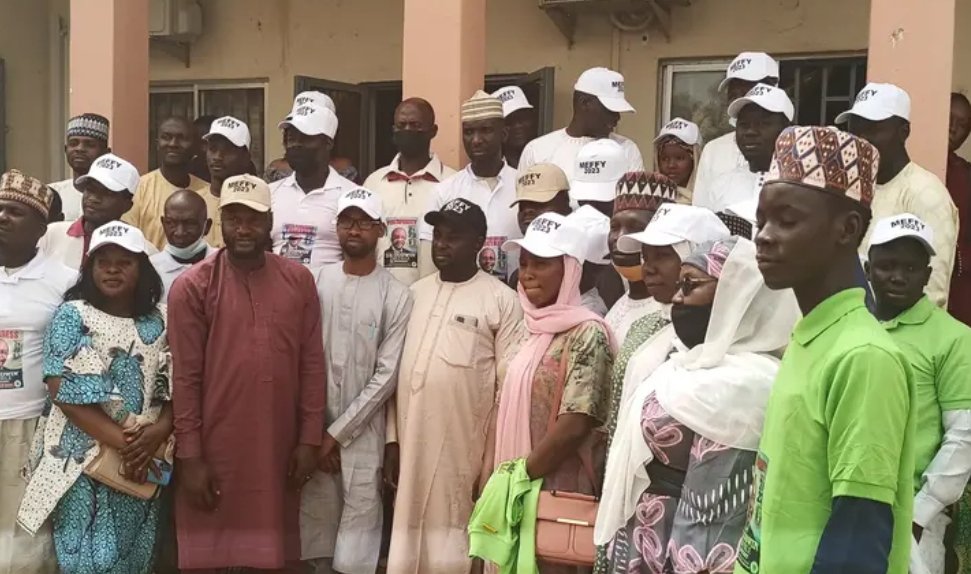 According to them the Igbos are Nigerians and their Brothers that need to be carried in the power sharing formula of the country.

They said the exclusion of the Igbos race in giving them the opportunity to produce President is a deliberate wickedness by other people to stop their chances.

The northern group who chanting for “MEFFY” as a slogan beckoning on the governor of Central Bank of Nigeria (CBN) Godwin Emefiele to contest the oncoming presidential election based on his excellent performance while superintending the Nigeria’s apex bank.

Spokesman of the group, Aliyu Mohammed Sani who made the appeal on the CBN governor in Yola, Wednesday, also said the call became imperative in view of the need for fairness and balance among Nigeria’s major ethnic nationalities.

He noted that since the coming of the current democratic dispensation in 1999, two of the major Nigeria’s ethnic groups including Yoruba and Hausa/Fulani have straddled the plum office noting however that Igbo ethnic group is yet to get similar gesture.

Sani disclosed that one man whom the cap fits amongst the members of the Igbo ethnic group is Emefiele due to the impact his policies have made on the socio-economic life of Nigeria.

He noted that the country has after independence witnessed a series of coups, counter coups and even a civil war which polarized the country and became a veritable threat to the corporate existence of the country.

“Today, this giant of Africa, whom the entire African countries look up to, is in a delicate and explosive situation and we are forced to learn from these events of the past. In doing so, we must look inwards to finding a permanent solution to the challenge of unity in this country, which is mostly that of leadership.

“Nigeria, since its return to democracy have had leaders from the two major ethnic groups (Hausa and Yorouba) and by divine providence, a minority from the Ijaw tribe, but not an Igbo leader. To unite this country, and for peace, progress & prosperity, we must produce an Igbo President come 2023.

“Dr Godwin Ifeanyi Emefiele, from his antecedents, is a full blooded Southerner, an Igbo man by tribe, a South-Southerner by region, born and brought up in the South-West and a champion of Northern Renaissance and ultimately a symbol of Unity.

“We, the Northerners, see Dr Godwin Emefiele as our own, because during his days at the Zenith Bank, his PA was a Northerner and so were many of his aides. Nothing has changed, he still has a Northerner as his PA in CBN, this is unity in diversity.

“If such an individual is elected as the president of this country, a lot of our ethnic problems will be gone, because Dr Emefiele is a de-tribaliised Nigerian, having one thing in mind, Nigeria as a country. This is evident in his watch as the CBN Governor, critically thinking and acting pro-actively to save the economy of this country that is faced with lots of challenges, most of which are Global.

“At this Juncture, we must appreciate the effort and commitment of President Muhammadu Buhari for giving the Central Bank of Nigeria under Dr Godwin Emefiele’s stewardship, the full autonomy to operate and consequently leading the diversification of Nigeria’s economy from total reliance on crude oil to Agriculture.

“Dr Godwin Emefiele has revolutionized this sector, saving Nigeria billions of dollars from importation of food, investing them in the citizens of this country to produce locally, which has created employment, wealth and guaranteeing food security.

“His knowledge of the economy is compared to none, his love for the masses of this country, his concern in securing their future makes them feel he is one of them. His policies and initiatives has greatly impacted the lives of the ordinary Nigerian like never before. His investment in the youths has significantly reduced the number of un-employed youths from all regions of this country.

“The Anchor Borrowers Programme, Youth Entrepreneurship Development Scheme (YEDP) the National Collateral Registry (NCR), the Creative Industry Financing Initiative (CIFI), the Agri-Business/Small and Medium Enterprises Investment Scheme (AGSMEIS) and many more are there with respect to his initiatives.

“We, the stakeholders of the North have found comfort in these reasons because they are crystal clear, therefore, in as much as politics remain a game of numbers and we have the numbers here in the North, we are ready to put them to judicious use that we believe will solidify the unity of this country further. All we want is for him to accept this call and declare for Presidency come 2023,” he said.