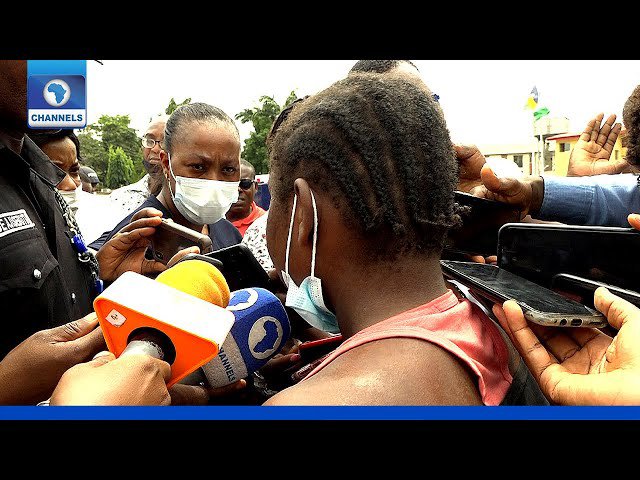 A 15-year-old nanny, Chiamaka Odo, was among over 30 suspects paraded on Monday by the police in Lagos State.

The Police Public Relations Officer in the state, Adekunle Ajisebutu, paraded Chiamaka and others at the Command Headquarters in Ikeja.

He stated that the police recorded many successes across the state in the last six weeks and all cases would be treated with utmost professionalism.

Ajisebutu said the nanny strangled her mistress’ son, Jayden Osokolo, kept in her custody to death, and confessed to being a member of the Ogoloma cult group in Anambra State.

Chiamaka, in a session with reporters, narrated how actions allegedly by members of her occultic group led to the death of the 10-month-old boy.

She said although she did not kill the baby physically, he died after the nanny was purportedly made to call his name repeatedly by members of the witchcraft group.

Chiamaka Odo claimed the death of her boss’ son was a result of pressure from the witchcraft group.

“My name is Odo Chiamaka,” the suspect introduced herself. “I was brought to Lagos from Anambra, but I was a member of a witchcraft group while in our village.

“There is one of my friends called Ameri. She gave me biscuits and sweets, and in the night, I found myself in one place and they welcomed me.”

During interrogation, Chiamaka explained that members of the occult group requested her to bring the baby’s blood to the spiritual world, hence she committed the crime.

According to the suspect, members of the group threatened to kill her if she fails to do as she has been directed.

She regretted the incident, stressing that she has made several attempts to leave the cult but to no avail.

“They gave me a baby bath and said I should call the baby four times. I called the baby’s name four times and blood filled the bath. That was what happened. They came in my dream when I was asleep and I found myself in Okoloma in Agulu, Anambra State.”