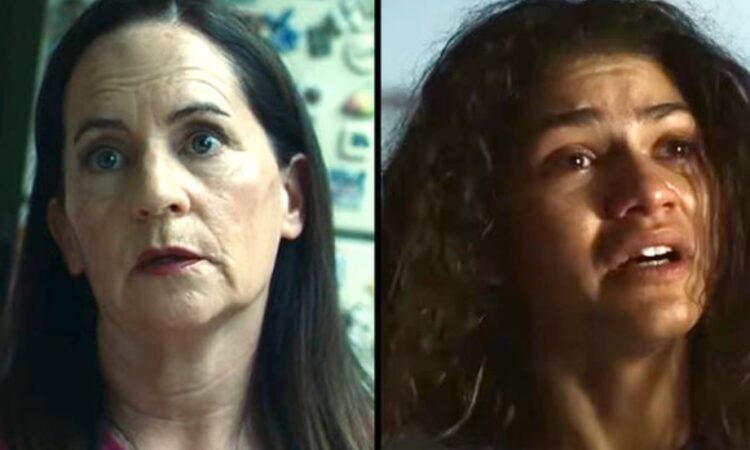 Martha Kelly, who plays the terrifying drug dealer Laurie, revealed that she found it “difficult to want to play a character that hurts kids”.

There’s absolutely no denying that Laurie is Euphoria’s most terrifying villain. The eerily calm drug-supplier with the monotonous voice, played perfectly by Martha Kelly, was first introduced in season 2 and quickly became involved with both Rue and Fezco’s storylines.

Each time we’ve seen Laurie on screen, she’s been creepy as hell, but according to Martha, there was one scene that took on an even creepier tone in the original script.

In episode 5, Rue ends up going back to Laurie’s house while experiencing severe withdrawal. Laurie offers Rue morphine to “help”, and then tells her to get undressed so she can get in the bath. After Laurie injects Rue, she drifts off to sleep in the bath and wakes up hours later locked inside Laurie’s house.

The whole scene is terrifying from start to finish, as viewers watch as Rue puts her trust in the sinister woman. But in an interview with Variety, Martha Kelly has revealed that she was initially worried to film the scene because it was somehow much worse than what we saw on screen.

Speaking about her first impressions of the character when creator Sam Levinson approached her with the script, Martha admitted that she was “heartbroken”: “I didn’t know if I could do it and I really wanted to be on the show. But it’s difficult to want to play a character that hurts kids.”

She then added: “There is that scene where Rue is getting into the tub, and Laurie injects her with morphine — and in the script, it is even creepier, because Laurie is helping her undress and get in the tub, and it is approaching this gross pedophilia vibe. Initially, I was just like, ‘I can’t do this.'”

Martha then explained that she spoke to Levinson about the scene, and she “decided not to ask him to change anything”.

She said: “I feel very strongly that I’m more of a comedian than an actor, so I would never tell a writer or a director if they could change something for me because I feel so lucky to have been invited in the first place. If I accept a part it’s because I want to do it, and I like the people I am working with, so I do not want to intrude with my own self-centered discomfort.”

Explaining what eventually made her come around to filming that awful scene, Martha said: “I was happy when Sam told me we were going to shoot the bathroom scene slightly out of focus, and that some stuff was altered because of that pause we took in filming due to the pandemic.

While Rue managed to escape Laurie’s apartment in episode 5, there still seems to be trouble ahead for the teenager.

With Rue’s suitcase of drugs that she loaned from Laurie now apparently flushed down the toilet, and Laurie’s threat to have Rue “kidnapped and sold to some real sick people” still looming over the whole situation, viewers are terrified at what might happen next.

There’s only two episodes of Euphoria season 2 left to air – what do you think Laurie will end up doing to Rue?