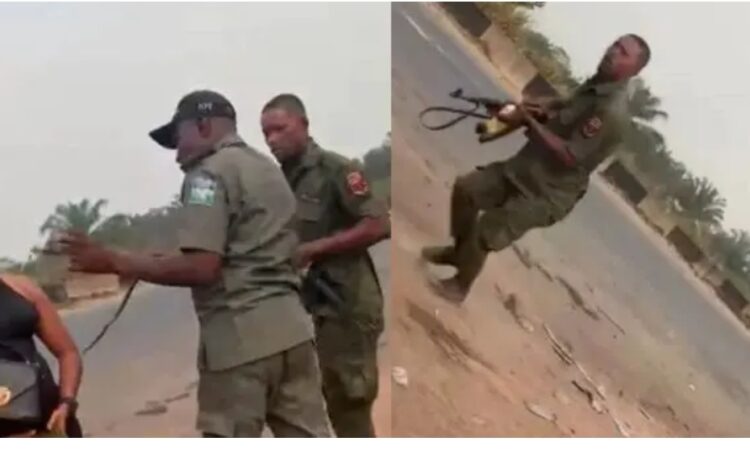 A trigger-happy police officer was seen assaulting a woman before shooting close to civilians when confronted.

In a video making the rounds online, Edo State Police officers are seen with some travellers they stopped by the road side.

One of the officers is seen scolding a female traveller before telling her, “Enter inside my motor.”

Before the woman could comply, another officer, said to have been attached to the disbanded SARS, lunged at the woman and slapped her.

This only angered the officer further and he cooked his gun and shot feet from the woman.

The civilians are seen running for dear life while other officers tried to get the officer who shot to calm down.

He refused to calm down and is seen hitting a male civilian who criticized the other officers for not reigning in the trigger-happy officer.

“Officer, you dey look am abi?” the male civilian asked other officers.

But the trigger-happy officer slapped him while asking, “you dey mad?”

But he refused and told one of his colleagues, “Oga, leave me” while still pointing his gun menacingly at civilians and cussing at them.

Nigerians have condemned the unnecessary show of power and harassment and called for the authorities to look into the incident.

Activist, Harrison Gwamishu, said “The authorities aren’t doing anything” about the incident.

Watch the video below.