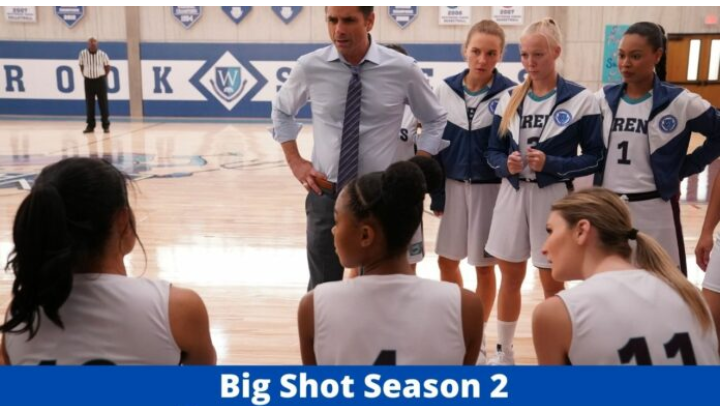 A hothead basketball coach who throws a chair at a referee may not be the type of guy you’d want to spend time with, let alone have coach at an elite all-girls high school. However, there’s a chance that you’ll grow to enjoy him as the Disney+ series Big Shot progresses—and not only because he’s played by John Stamos.

The biggest surprise of Big Shot, which is a hybrid of Mighty Ducks and League of Their Own and a redemption storey, is that movie isn’t technically a comedy while having humorous aspects. David E. Kelley co-created the show. (Yes, this is the same Kelley that took Ally McBeal, Doogie Howser, The Practice, Big Little Lies, and a slew of other great shows to the big screen.)

This isn’t Sesame Street or Breaking Bad.” In an interview in June, Stamos, who plays Coach Marvyn Korn, stated, “It’s somewhere in the centre, and it’s excellent.” “By not being as edgy, this show fills it with heart.” It’s a very warm, emotional show that isn’t too corny or romantic in my opinion.”

While this is true, Korn was not a warm and fuzzy character in Big Shot Season 1. He arrives at Westbrook School for Girls after being sacked from a high-profile NCAA job and doesn’t get off to a good start with his new team, even telling one of his players she needed to shed five pounds. Her reaction? “Everyone heard you were a psycho. They were mistaken. You’re just a tyrant.”

Korn, on the other hand, begins to get it together, becoming more of a mentor and less of a taskmaster as he begins to form ties with his players. He even learns to be a better father to his own adolescent daughter, who moves in (and to Westbrook!) when her mother (Korn’s ex-wife) accepts a job in Italy. According to Disney, Coach Korn eventually “becomes the guy he’s secretly always longed to be and the father he never had.”

Big Shot won over fans and critics alike, with one calling it one of the finest original Disney+ shows in 2021. One reason for this could be that the show is about more than just Korn; it’s also about the young women he mentors. Their lives on and off the court are chronicled in the show. “It’s about empowerment and young ladies discovering their voice and going for what they want out of life,” adds Yvette Nicole Brown, who portrays the school’s dean.

Another reason for the show’s success could be that having a show centred on young female athletes is still uncommon, especially in this day and age, and the young women on the Westbrook Sirens had to learn to play. “There was nothing phoney about it.” “There were bits I wished were fictional, but they were entirely true,” actress Nell Verlaque revealed in April 2021.

On September 2, Disney said that Big Shot Season 2 is now in the works. Stamos is ecstatic. “At its core, Big Shot is about courage and heart, which Disney+ displayed by offering us a second season,” Stamos wrote on Instagram, thanking fans and critics alike. “I’m so thrilled to continue to portray Coach Korn, a man who learns to let go of preconceived prejudices and learns from a wonderful group of women, helping him to progress and grow,” he later added. And yet, he still has so much to learn…thankfully, he’ll get the opportunity in Season 2.”

Is Big Shot a cancelled show?

When Season 1 finished in June, fans were eager to find out what happened to Korn and his team, so when there was no renewal news for weeks, they began to worry that the show had been cancelled. Stamos, on the other hand, clung to hope. “I have a good feeling about returning, but it’s too soon,” Stamos stated at the time. Fortunately, in September, Disney provided a firm response as to whether or not the show will be resurrected—and the answer was yes!

When will Season 2 of Big Shot be released?

It’s unknown when Big Shot Season 2 will premiere, especially considering filming won’t begin until 2022. The show will most likely air later that year.

What occurred in Season 1 of Big Shot?

(Spoilers for Big Shot Season 1 are ahead!)

Coach Marvyn Korn, gruff, abrasive, and hotheaded, lost his NCAA coaching position after throwing a chair at a referee, so he agrees to be the coach at Westbrook, a posh all-girls private high school. His tough demeanour does not endear him to the athletes. Korn’s daughter Emma joins him full-time when her mother accepts a job in Italy. Korn gradually learns to soften his severe exterior and begin to create stronger relationships. The Westbrook Sirens begin to improve on the court, and people, including the University of California, Santa Barbara, take note (UCSB). The school hires him as a coach just as the Sirens prepare for a huge game against the Carlsbad Cobras. The Siren playbook goes lost, and they suspect Carlsbad; Coach Korn is forced to devise new plays, including one dubbed the “Sacrifice Play.”

Coach Korn declines the job offer from UCSB and chooses to remain at Westbrook. “I set out to design a new playbook for the team, which I did, but I ended up drafting a new one for myself,” he says ahead of the big game. Tensions are high due to several pranks intended to put the Sirens off their game (including a swarm of bees that enters the gym! ); Coach Korn suggests playing without fans. Mouse throws the winning basket in a nail-biter after using the Sacrifice Play.

Who is in the cast of Big Shot?

Stamos, who is still known to fans as “Uncle Jessie” from the Full House franchise, wasn’t expecting to play Coach Korn at all. When he heard about the “new” David E. Kelley programme, he assumed he’d be playing a darker role, possibly a lawyer. “I’ve never been really athletic. “I’ve never been into or watched sports,” he admitted to Collider earlier this year.

Fortunately, he succeeded—and Kelley is delighted Stamos got the position. “The programme has touched so many hearts—particularly John Stamos’ genius as Coach Marvyn Korn,” the writer/producer noted.

Stamos, of course, is back for Big Shot Season 2, and it appears that the following Season 1 player will be among those on the floor with him:

Is there any information on Big Shot Season 2 spoilers?

There haven’t been any Big Shot Season 2 spoilers released yet, but there’s lots of speculation about what might happen next. (Once again, Season 1 spoilers ahead!)

Because Westbook defeated Carlsbad in the Season 1 championship game, the team will continue as a Division II high school. With that transformation will come new basketball teams and personalities, as well as more difficult playing obstacles. Will they be able to maintain their Division II standing?

The Season 1 conclusion also revealed that Assistant Coach Holly will be the new coach at Carlsbad, the team that the Westbrook Sirens narrowly defeated. That implies a rematch with Westbrook is possible, which would be a high-stakes situation for everyone involved.

Is there a trailer for Big Shot Season 2?

Not yet, because Season 2 has yet to be filmed. There was, however, a teaser announcing the upcoming season, which was released on September 2. Stamos declares in it that if he makes a basket, the show will be renewed for a second season. He misses many shots before pleading with Disney+ to renew the show. The screen turns to a title card stating that Season 2 is on its way. Now, lets watch season 1 below,

Where Can You Watch Big Shot?

If you want to watch Big Shot, you merely need to go to Disney+. Fortunately, Disney+ is a worldwide accessible platform with a rapidly developing inventory of high-quality content that intends to compete in the streaming sector with behemoths like Hulu, Netflix, and Amazon Prime Video. A necessary Disney+ subscription will provide you with access to thousands of hours of family-friendly entertainment. As a result, you get Big Shot, The Simpsons, the whole Marvel Comics Universe, all Disney productions, and National Geographic.

Big Shot has how many episodes?

Big Shot’s first season consisted of ten episodes ranging in duration from 43 minutes to 54 minutes, with the season finale being the longest.

Big Shot Season 2 will be available exclusively on the Disney+ streaming site, where you can also watch Season 1 right now.