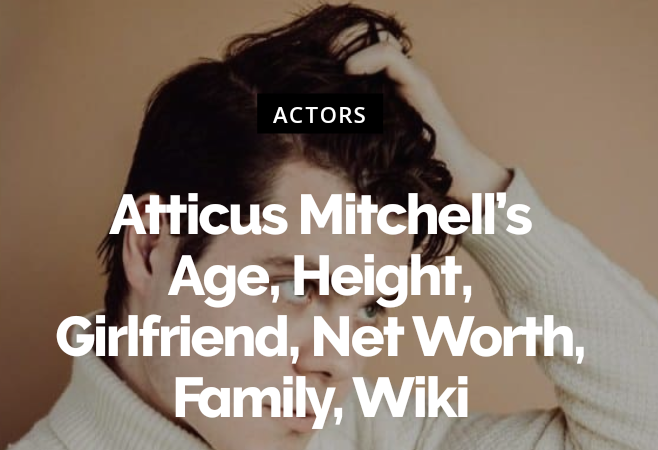 Popular Canadian actor and musician, Atticus Mitchell is known for his role as Benny Weir in “My Babysitter’s a Vampire”.

That is not what defines him though. Find out more details of Atticus Mitchell’s life in this biography.

Atticus Dean Mitchell was born under the Taurus zodiac sign on 16 May 1993, in Toronto, Ontario Canada to Canadian parents. He and his siblings – Caleb, Fox and Clarissa Mitchell – were raised by their parents in the Beaches neighborhood, Toronto, living in the same neighborhood until they became adults.

Atticus was exposed to the entertainment industry at a tender age.

His father was a small-time theater artist, while his mother worked as a secretary in a local telecommunications establishment. Due to his father’s position in the community, he often performed at the local theater during the Stratford Festival.

Atticus attended and matriculated from the Malvern Collegiate Institute, Toronto in 2011. He almost proceeded to Ryerson University, for a degree in Public Research, however, he derailed and ended up following in his father’s footsteps in the acting industry. Actually the Mitchell family consists of entertainers – Atticus’ older brother Caleb is a musician, while his younger sister, Clarissa is an actor and producer, who has appeared in films such as “Tuesday, 10:08a.m”, “Stockholm” and “I, Terrorist”.

As a teenager, Atticus was drawn to music. His father, who was an artist himself, noticed early on and signed Atticus up for music training. He subsequently had four years of drum lessons and eight years of piano lessons training. Influenced by his brother Caleb, he joined a band called “The Fishwives” as the drummer. They composed and performed alternative, indie rock and robot music, and produced songs including “Devil’s Daughter”, “Rum and Band-aids”, “Shrug” and “Carapace”.

Atticus, though, was interested in a solo music career. In between acting and personal projects, he worked on his music, and on 12 May 2018, he released a solo extended play (EP) entitled “Red Giant”.

Even though this marked the beginning of a solo musical career for Atticus, he still plays with The Fishwives band in Toronto.

Atticus Mitchell made his acting debut at age 16, in the television series, “How to Be Indie” (2009), which aired on YTV and Disney Channel. He played Carlos Martinelli, a teenage cyber-bully in 10 episodes of the series, and his performance earned him some fans both in and out of the industry.

Next, he played the role of a teenage boy in an episode of “Living In Your Car” (2010). Atticus’ breakthrough came in 2011, when he landed his first major role in “My Babysitter’s a Vampire” (2011), a Canadian horror television film in which he played Benny Weir, Ethan’s best friend, spellmaster and vampire-hunting teenager.

The film was a commercial success, largely due to the stellar performance of the actors. Atticus was subsequently nominated for a Gemini Award for his contribution to the film.

Due to the positive reviews from the media, the producers made a television series out of the initial film, which aired on Teletoon and Disney Channel from 2011 ‘til 2012, with Atticus retaining his role as Benny Weir. This is said to be the most relevant role of his acting career so far.

Atticus’ first movie role was in “The Colony” (2013), a Canadian science-fiction in which he played Graydon, a hero who is eaten by the cannibals, and also starring alongside Laurence Fishburne, Kevin Zegers and Bill Paxton.

For a long time, Atticus played teenage characters in TV series and shows. Recently, he has started taking on more adult characters

His most recent movie is “Riot Girls” (2019), a post-apocalyptic science fiction film in which he played Cracker.

So far, Atticus Mitchell has proven himself to be a versatile actor and his fans are eagerly waiting to see his next project. He is currently signed to Gary Goddard Agency, a talent agency based in Toronto.

Atticus revealed that he was in a relationship with his high school sweetheart for two years, but after matriculation, they parted ways as neither of them was willing to take on a long distance relationship.

Bring a very private person, Atticus has only made one of his relationships public on social media. He met Sarah at a party sometime in 2015, and soon they started dating. Three years later, fans began to speculate that the couple had broken up.

Although Atticus didn’t officially comment on it, it seems they broke up in the summer of 2018, as it was around that time that he stopped posting her pictures on his Instagram page.

At the time of writing this article, Atticus Mitchell is yet to reveal if he has a girlfriend, or a romantic interest in any woman.

Atticus and his siblings had a dog while growing up, and when Atticus moved out, he took his pet with him. However, it recently passed away, and he shared the sad news on his social media pages.

Hello loves to dress clean – button-down shirts and denim for regular outings with friends, and fancy tuxedos for formal events.

At the time of writing in mid-2021, Atticus Mitchell has an estimated net worth of $5 million, accumulated from his acting, music and personal projects. Property owned by Atticus is undisclosed to the public at this time.